John of 38 Degrees Skipton and Jette of Skipton Quakers talked to Lindsay Moore and  the result was the first article a fortnight previous, then this follow up article…

POIGNANT pictures of refugees fleeing the violence in Syria have touched the people of Craven. 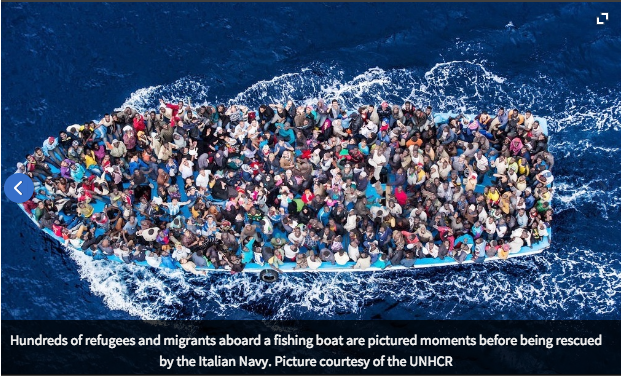 It will help and offer friendship to refugees coming to Skipton, campaign for the Government to adopt a more compassionate approach and raise money for organisations caring for the refugees.

“These people are desperate and we need to recognise that,” said Skipton resident and Red Cross refugee support volunteer John Launder, who has helped to set up the group.

A similar support group has also been formed in Upper Wharfedale.

Its members have sent a letter to the leaders of North Yorkshire County Council and Craven District Council, who are in talks with the Home Office.

In it, they commit themselves to providing local refugees with support or, if the refugees are housed outside the area, to supporting voluntary organisations (financially or in time) that assist with refugee integration.

Craven has a history of welcoming refugees – in the summer, 30 refugee mothers and children from 12 different countries spent a weekend in Malhamdale and took part in a church service.

Some stayed with Dales families and others at the Field Centre. All agreed it had been a wonderful weekend. One Muslim visitor wrote: “The trip took away my loneliness and I felt I was in a sort of family. It has given me an opportunity to see the countryside and refresh my mind. Being in a church for the first time made me feel like regardless of our differences we are all together to worship god and love each other.”

It is a hope shared by the new Skipton group, whose first meeting at the Friends Meeting House was attended by a wide range of people, from sixth formers at Ermysted’s Grammar School to an Iraqi family who came to the UK in 1999.

“The solution is not to put up barriers, but for a negotiated settlement to the Syrian Civil War,” said Mr Launder, who also works with the Bradford City of Sanctuary which helps the 600 refugees who have settled or are settling in the city.

In a bid to spread the message further, he and fellow Sanctuary member Helen Kemp have put together an article.

They write: “What the current, unprecedented avalanche of refugees arriving by any means possible, most of them tortuous, has done is to wake up vast sections of the British public to a situation that has in fact been going on for a very long time, and that situation is the uprooting and fleeing their homes, their countries, their families, their whole lives, of people who feel they have no other choice than to embark on a perilous journey, knowing not whether they will ever arrive anywhere where they will be believed, welcomed, supported and helped to start a new life, and doing this because they are in fear of their lives.

“In the case of Syrians and others fleeing war-torn countries, this is because their whole way of life has been destroyed. To embark on this journey with your whole family, including children and babies is perilous indeed, and the daily tragedies of drownings in the Mediterranean have spoken to us as nothing else has done for a very long time.

“Having arrived in Britain by various means, some safe, some dangerous, always traumatic, once their initial claim has been recorded, they are dispersed to the larger cities such as Bradford where around 600 have settled, including around 100 Syrian refugees, 50 of whom are children. And where today they do receive a good welcome and generous support from the community.

“But for those people working with asylum seekers the iniquities of the current system are a cause of huge frustration and indeed shame. One has only to hear the testimony of an asylum seeker about their situation, their own personal story, to realise that the way they are treated by the Home Office, the decision makers and the Border Agency leaves much to be desired, and in many cases is shameful.

“Many people across the country have come forward and said they would be prepared to house a Syrian family. Clearly there is a need for some joined up thinking. However, the Government is very resistant to the idea of taking more than just a very few of those now fleeing from terror in Syria, and not prepared to take any from the camps in Calais or those who have arrived by boat in the Mediterranean.

“The recent march in central London proved that there is an outpouring of support for asylum seekers and refugees.

“For those wanting to help, fundraising and donations to the charities and NGOs go directly to support the work these organisations do with asylum seekers on a daily basis. Volunteers are also welcome. One of the most important things though, that everyone can do to help, is work towards changing the mindset of the great British public, and most of all the politicians.

“The message is this: refugees and asylum seekers are not a threat to our society, once accepted by Britain they want to make a contribution to it. They bring with them their skills and their talents, their passion for life, their love for their families, their desire, along with our own, to continue the human race and provide a world that is good and fit for future generations to live in.

“Many refugees have gone on to make huge contributions to the wealth of this country, the National Health service would collapse without foreign medical professionals, many of whom came as refugee

“It is wonderful to see people holding up banners saying ‘refugees welcome’. We now need to find a way of getting the message across to our current government that the wish of many of its people is for this welcome to be implemented in practice.”